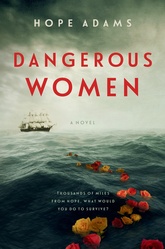 London, 1841. One hundred eighty Englishwomen file aboard the Rajah, embarking on a three-month voyage to the other side of the world.

Except one of them has a deadly secret and will do anything to flee justice.

As the Rajah sails farther from land, the women forge a tenuous kinship. Until, in the middle of the cold and unforgiving sea, a young mother is mortally wounded, and the hunt is on for the assailant before he or she strikes again.

Each woman called in for question has something to fear: Will she be attacked next? Will she be believed? Because there is nowhere to flee, and how can you prove innocence when you’ve already been found guilty?

"A historical episode artfully adapted in a bleak tale that offers glimmers of hope for women discarded by society."—Kirkus Reviews