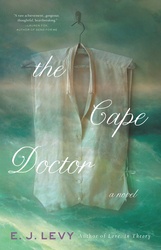 Inspired by the life of Dr. James Miranda Barry, the story of one man’s journey from penniless Irish girl to one of most celebrated and accomplished figures of his time.

Beginning in Cork, Ireland, the novel recounts Perry’s journey from daughter to son in order to enter medical school and provide for family, but Perry soon embraced the new-found freedom of living life as a man. From brilliant medical student in Edinburgh and London to eligible bachelor and quick-tempered physician in Cape Town, Dr. Perry thrived. When he befriended the aristocratic Cape Governor, the doctor rose to the pinnacle of society, before the two were publicly accused of a homosexual affair that scandalized the colonies and nearly cost them their lives.

“The Cape Doctor does what the best novels do. It invites us to put aside our own lives for a time in order to live someone else’s. And it repays the moral imagination that requires with something like wisdom.”―Richard Russo