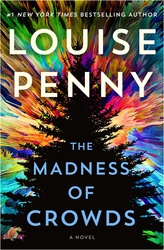 The Madness of Crowds

Armand Gamache is asked to provide security for what promises to be a non-event. A visiting Professor of Statistics will be giving a lecture at the nearby university.

While he is perplexed as to why the head of homicide for the Sûreté du Québec would be assigned this task, it sounds easy enough. That is until Gamache starts looking into Professor Abigail Robinson and discovers an agenda so repulsive he begs the university to cancel the lecture.

Discussions become debates, debates become arguments, which turn into fights. As sides are declared, a madness takes hold. When a murder is committed it falls to Armand Gamache, his second-in-command Jean-Guy Beauvoir, and their team to investigate the crime as well as…the madness of crowds.

“Series novices and die-hard fans alike will be left breathless―and moved.”―People Magazine (Book of the Week)