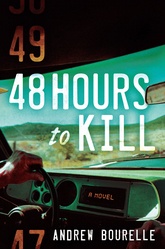 Serving a 10-year sentence in a Nevada prison for armed robbery, Ethan Lockhart hopes that he can one day become a productive, law-abiding member of society. But society has other plans for Ethan. When he’s given a 48-hour furlough to attend his sister Abby’s funeral, he learns that her body was never found—just enough blood to declare her dead instead of missing--and he begins to suspect that there’s more to her death than was reported. Ethan decides to use his 48-hour window to find out what happened. But to get to the bottom of the mystery, he’ll have to return to his unsavory past.

If Ethan is going to solve his sister’s murder in 48 hours, he will have to become the criminal he swore he’d never be again.