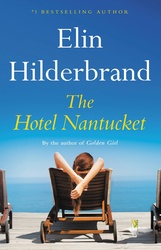 When Lizbet Keaton’s named the general manager of the Hotel Nantucket, a once Gilded Age gem turned abandoned eyesore, she hopes that her local expertise and charismatic staff can win the favor of their new London billionaire owner, as well as that of a wildly popular Instagram tastemaker who can help put them back on the map. And while the Hotel Nantucket appears to be a blissful paradise, there’s a lot of drama behind closed doors. The hotel can’t seem to overcome the bad reputation it earned in 1922 when a fire killed 19-year-old chambermaid Grace Hadley. With Grace gleefully haunting the halls, a staff harboring all kinds of secrets, and Lizbet’s own romantic uncertainty, is the Hotel Nantucket destined for success or doom?

"It's not officially summer until Elin Hilderbrand drops her annual page-turner.” —Good Housekeeping