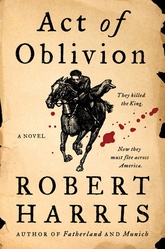 Ten years after Charles’ beheading, the royalists have returned to power. Under the provisions of the Act of Oblivion, the 59 men who signed the king’s death warrant and participated in his execution have been found guilty in absentia of high treason. Some of the Roundheads, including Oliver Cromwell, are already dead. Others have been captured, hung, drawn, and quartered. A few are imprisoned for life. But two have escaped to America by boat.

In London, Richard Nayler, secretary of the regicide committee of the Privy Council, is charged with bringing the traitors to justice and he will stop at nothing to find them. A substantial bounty hangs over their heads for their capture—dead or alive...