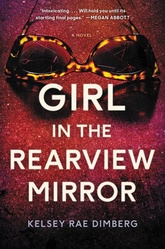 The Girl in the Rearview Mirror

One mistake will blow her new life apart

Desperate to put her past in the rearview mirror, Finn Hunt leaves the Midwest for Phoenix, where no one knows her story.

While she’s working a dead-end job, a chance meeting with Philip Martin, son of a prominent US Senator, leads Finn to a position as nanny for Amabel. Quickly seduced into the Martins’ privileged world, Finn can almost believe she belongs there, almost forget the dark past that haunts her.

Then, in the stifling heat of a desert summer as the Senator’s re-election looms, a strange woman begins to follow Finn, claiming a connection to Philip and threatening to expose the family to scandal. As Finn tries to protect Amabel, and shield the Martins, she’s inadvertently drawn deeper and deeper into their buried secrets.

“With hairpin twists and immense psychological acuity, Kelsey Rae Dimberg’s Girl in the Rearview Mirror is as seductive as the glamorous, privileged family at its center—and as cunning. An exciting, intoxicating debut, it will hold you until its startling final pages.” -Megan Abbott, bestselling author of Give Me Your Hand